On Sunday morning, not wanting to experience another fruitless round of wandering around searching for open breakfast spots I did some googling and yelping and found a promising restaurant called The Don’s. I had been using google maps to guide myself around Winnipeg and probably should have paid the extra $14/day for the Garmin guidance system as I had been regularly getting lost and taking longer than anticipated getting from A to B. This time I was simply led completely astray. Following the given directions took me to a strip mall with a hot yoga studio and a nearby mixed martial arts dojo. While I may have enjoyed those activities at another point in the day, at that time I was far too hungry for such physical activity. Entering the address into Google maps brought up another location, so I gave it another shot. This time I was told I had arrived at my destination as I crossed an overpass. Perhaps it’s somewhere underneath, I thought. But no, alas it was not. Defeated, I returned to the Fairmont for expensive but delicious Banana Bread French Toast with maple bacon jam and strawberry pecan compote in The Velvet Glove. Yes, their restaurant is called The Velvet Glove. 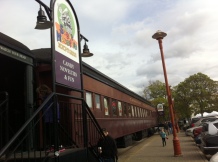 After breakfast, at Hello Moth’s recommendation I checked out the Facebook seminar put on by Alex Houg and Dennis Yu. They had some helpful advice on how to make the most out of Facebook and target the right people. After that I had my pitching session with the Music Supervisors. It was far less formal than I expected. I sat at a round table with four other artists and the music supervisors took turns sitting at our table and talking about our music and the general material they needed to fill with content. Our first supervisor was so casual when he sat down I thought he was another artist.

There were more seminars throughout the afternoon, but I needed some lunch and I wanted to have some snacks in the hotel room for later that night and the following morning. The doorman at the hotel gave me directions to the Forks market which was quite charming and reminded me of Vancouver’s Granville Island. It also gave me the opportunity to walk past the new Museum of Human Rights. There was a cute little candy store and vintage video game arcade in a couple train cars outside the market. I spent a quarter and learned that I still suck at Virtua Fighter.

I had missed the first two Networking Mixers so I felt it was important I go to the last one. I met a few more industry professionals and musicians. I Introduced myself to a couple of the members of Yes We Mystic, and Matt Paterschuk introduced me to the lovely and effervescent Amy Thiessen. As an electronic artist I felt like a bit of a novelty as I was definitely in the minority. I also felt pretty green compared with most of the other artists as everyone seemed to have at least one tour under their belt. Despite this I found people to be very interested and receptive toward what I do.

BreakOut West had arranged a shuttle to the casino for the awards ceremony. I got to sit next to Marcus from the Sojourners and we chatted about places he toured and jazz music. I always find casinos to be pretty surreal, and the Club Regent was no exception. While being led to the restaurant we passed through an arched aquarium and the area around the restaurant had a country prairie motif with a 360 degree mural to complete the effect.

Grant Lawrence hosted the awards show in various iterations of CBC attire. There were a number of musical performances but my favourites were from Ron Paley, Fred Penner, and Dan Mangan. Ron Paley was introduced as a Jazz Big Band Leader so I was expecting him to play something more traditional, but was really surprised when his 5-piece group sounded more like Weather Report than Glenn Miller. I didn’t realize it, but my category was almost dead last. The anticipation was killing me, and while I was pretty sure I wouldn’t win I wanted to have at least an idea of what I would say if I did. As I sat there thinking about how thankful I was to my family and friends who made my album possible, listening to the touching tribute to Kevin Walters, Fred Penner thanking his wife and family, and then his children thanking him and singing him a tribute song, I found myself rather misty eyed. As it turned out, the best electronic award went to Chimp Blood by Pigeon Hole so I didn’t have to worry about stumbling through my vaguely cobbled together speech. I was really happy to see The Sojourners and The Mariachi Ghost win in their categories.

Music BC hosted a handover party after the awards at a place unfortunately named Whiskey Dix. I was pretty quickly steered toward the Phillips tasting booth and spent most of the night in close proximity, having more than my fair share of samples. I also learned about Carisa’s fascinating career as a circus and sideshow artist and magician. She told me all about swallowing flames, swords and spiders, the former put her in Ripley’s Believe it or Not (or maybe it was the Guinness Book of World Records), the latter killed her fear of spiders.

The next morning I got to see the underground mall open and busy for a change. All weekend long it had seemed like a post-apocalyptic wasteland of some kind. I couldn’t help but picture a horde of zombies or raiders lying in wait. During the week it was a complete contrast, filled with commuters and restaurants were open and able to provide me breakfast. I had hoped to check out the Museum of Human Rights on my last day, but it was unfortunately closed. On a friend’s recommendation I went to check out Video Pool, a nonprofit, artist-run centre dedicated to the creation, exhibition and promotion of independent media art. They have a fairly impressive facility with a whisper-quiet 5.1 mix room and very reasonable rates. Winnipeg is a city where it’s clearly apparent that they’re fiercely proud and supportive of their artists, something I wish I could say about Vancouver.

At the airport I ran into Rafe and Kirby from Whiskey Jane and we traded our thoughts on the festival while we waited for our flights back to YVR. As it turned out, I was happy to find Dan Mangan was seated on the plane behind me. I had been too shy to approach him and his entourage at Ozzy’s after my first showcase so I was pretty lucky to have a chance to talk to him thrown in my lap. He’s also a super nice guy and a big fan of Kurt Vonnegut.

It was such a whirlwind of a trip packed with events and introductions that it felt much longer than three nights. Vancouver was warm and glorious when I returned and I was grateful to be able to have a beer on my balcony (in a t-shirt and jeans!) with my wife after the cold wind of Winnipeg. I like to think I left a trail of business cards, smiling faces and tapping toes in my wake. Being there with all that Canadian talent really inspired and galvanized me to keep doing what I’ve been doing. It became clear that I need to play live more often and in more places. I was advised that adding a strong visual component to my show would be a big improvement and I think that’s something worth pursuing. Next year, BreakOut West will be held in Victoria and it will be combined with the Rifflandia Festival. I’m hoping to have two contrasting sets based on my Japanese and Thai recordings ready to perform by that time. Before I dive into that, I’m planning to fire off a few remixes. I’ll be discussing the first one next week. 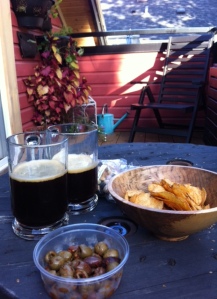