Fall and winter of 2013 saw a few new instruments enter my arsenal at Studio Sublime. The strangest one came first. My wife bought me something called a Sonic Forest for my birthday. I must admit my initial reaction when she showed it to me was not very enthusiastic as I didn’t really know what to make of it or how I would incorporate it into my music. However, when it arrived I quickly fell in love with it and the experimental, hands on approach to music making that it invited. Basically, the Sonic Forest is a wooden box with a contact mic inside and a 1/4″ audio output. Attached to the box sprouts a forest of guitar and bass strings of various lengths that you can pluck, rasp, bow or otherwise molest to produce a variety of sound textures. It also has a Mute switch and a tone switch that functions as a high-pass filter. I made a short song using only the Forest and effects from Ableton Live and you can listen to it below. You can also check out Electro Lobotomy’s other esoteric creations here: http://www.etsy.com/ca/shop/ElectroLobotomy?ref=l2-shop-info-

I received a generous bit of birthday money from my Grandpa so I decided it was time to pull the trigger on an instrument I’ve been obsessing over for a while now: A Hank or Steel Tongue Drum. Hank drums are propane tanks modified into beautiful musical instruments. You remove the valve, cut a band out of the middle and fuse the two pieces back together and cut round “tongues” that produce tonal notes when struck. You can apparently tune them to almost any scale if you know how to cut them properly. Hank drums are based on Hang drums which are much larger, and much more expensive. I got to play a Hang drum a few years ago when someone brought one to a wedding, and I’ve played a friend’s Hank a few times. It’s really easy to fall in love with these engaging, hypnotic and beautiful instruments. 8dio.com has great sample libraries of both instruments, but it’s just not the same as having the real thing sitting in your lap. 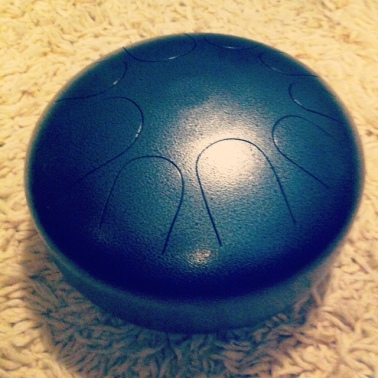 I had a really hard time deciding on which scale and key to order as they all sound so good, especially when played by the skilled musicians that demonstrate them on Youtube. Fortunately I found a company that offers double sided drums at great prices so I didn’t have to settle on just one. I opted for the “Hijaz” scale in E and the “Pygmy” in D as my combo. Hijaz is described as a modified Phrygian mode and Pygmy is a minor pentatonic scale. I’ve done some recording with the drum but nothing ready to post yet. Mainly I’ve just been enjoying playing it and sharing it with my friends. I’m planning to record a short video demonstrating it soon. Meanwhile you can have a look at their drums here and listen to some players who know what they’re doing: http://steeltonguedrums.com

A friend of mine was downsizing his studio and offered me his old Electric Bass Guitar. He recommended a site appropriately enough called http://www.scottsbasslessons.com What a fantastic resource! I recommend it to anyone hoping to learn or improve their skills on the bass guitar. I felt that in the process of becoming a better bass player I became a better all-round musician. Shortly after getting the bass, a friend of my wife was clearing out some of his stuff in storage and he offered me an electric guitar! When I was a teenager I had a fleeting interest in learning guitar so I thought it would be a good idea to buy a cheap guitar from a thrift store. I think I spent $100 and the case no doubt covered the majority of that value. It was a pretty nice case. Fake alligator skin with blue velvet inside. The guitar on the other hand was not so nice. The bridge was lifting up, warping the wood of the face and lifting the strings far off the fret board. This made it really hard to play, sound awful most of the time, and it really discouraged me from wanting to learn guitar. Having this electric given to me has been a lot more fun, especially experimenting with Native Instruments Guitar Rig. I have a long way to go before I’m proud of my playing with either instrument, but recording some simple riffs and strums has already added some great life to my tracks. I still have that cheap old acoustic, and I was recently motivated to give it another shot with a different approach. While visiting Portland last summer, I stayed in a place that happened to have a Japanese Koto. It needed tuning so I took it upon myself to tune it so I could take it for a spin. One of the other guests had an acoustic  guitar with her and tuned her guitar to match the Koto and we had a fun impromptu jam. My acoustic is now roughly tuned to Koto tuning. In the future I might experiment with other tunings or some physical modifications to see what kind of unique sounds I can get out of it.

Next I was introduced to the Arturia MicroBrute, a $300 analog mono synth with USB, MIDI Sync, a programmable sequencer, and a number of CV inputs and outputs. It had to be mine. The CV connections make it such a great companion for my MFB Kraftzwerg, and I had been wanting a multimode filter module. This guy is going to be used quite a bit on my next album for sure, plus it makes my Kraftzwerg much more performable and portable as I can use this new guy as a tiny controller for it. It sounds pretty damn badass too.

I picked up another little noise maker in the form of the Korg Volca Beats. This little guy had a huge buzz around it and generated palpable plumes of gearlust all over the interwebs. I had one on order for months so I was pretty excited when I finally took it home. In case you don’t know what I’m talking about, it’s an analog/digital hybrid drum machine for $150. When I actually plugged it in and tried it out I was fairly underwhelmed, which was disappointing and relieving at the same time. I had acquired so many new pieces in such a short span of time I was worried this would be more of a distraction then an asset. With this in mind I decided fairly quickly that it hadn’t made the cut and it would have to go. I found the kick to be fairly thin, the tune and decay knob didn’t really do much so I’m guessing they don’t have a large enough range, while the “Snappy” knob became far too bright at its highest point. The snare tuning on the other hand was quite noticeable, but it was just odd sounding in my opinion. It seemed more like a Tom with white noise. It was pretty fun to play around with, and I got some good samples out of it, and for the price I can’t really complain, but I wasn’t sorry to see it go.

I also sold my Korg Electribe ES-1mkII. I originally bought this because I wanted a step sequencer MIDI controller for sequencing drums and I found it for really cheap on Craigslist. Now lots of controllers have jumped on the step sequencer bandwagon. I ended up using far more functionality on this unit than I expected. The effects were tons of fun, and I used it live with my trumpet for several gigs. The sampling features were also cool in a slightly dated way (32kHz, the sample rate that time forgot, but fortunately ProTools still exports). The main reason I sold it was because I felt it would become redundant once I bought another piece for my studio.

Which leads me to… 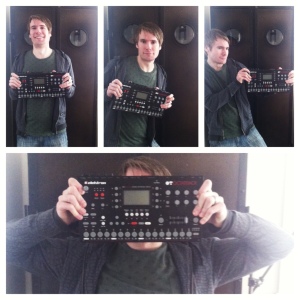 The Elektron Octatrack. This is the last thing for a while. I promise. Anyways, this post is long enough already so I’ll save talking about this guy for another day. Clearly I’m incredibly fortunate to have all this cool stuff, but more importantly I’m fortunate because many of these were gifts from loved ones encouraging me to keep doing what I do. So stay tuned, for soon I’ll start posting the fruits of my fortune.