The first song on the album takes its name from the beautiful botanical garden at Ian Anderson’s Caves Branch Lodge. It was made by Ella Baron and has the largest collection of orchids and air plants in the country. 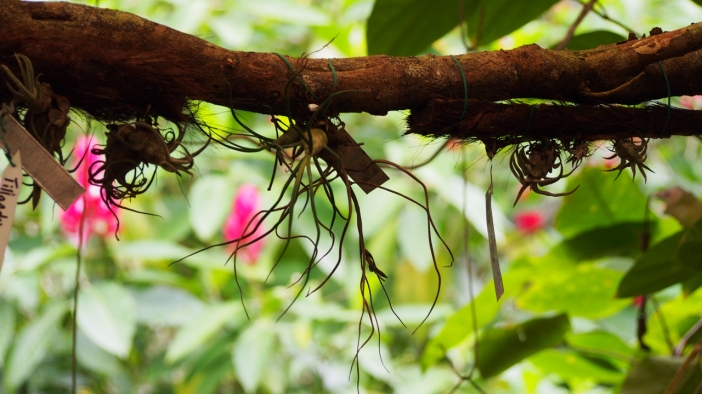 I spent a fair bit of time exploring the grounds recording birds and crickets, which you will hear at the start of the track. I also recorded a fascinating creature I had never heard of before: A perfume bee. These iridescent green insects rub their bodies against particular flowers to scent themselves to attract a mate. I sampled this recording into Izotope’s Iris, which allowed me to convert it into a pad sound that I layered with the main repeating string melody.

Stylistically, the song was heavily influenced by Aaron Static and Fort Road’s remix of Ghosts, by Thomas Newman from the Road to Perdition soundtrack. I wanted to try to make something with a similar stately epic grandeur.

While I was busy gathering recordings, my wife was taking photos, including the ones used in this post. She has since used these images as source material for clothing design, like the dress below which used the orchid picture featured above. If you would like to see more of her work, be sure to check out http://www.juncodesign.com

While making this track, I had a lot of fun using the Octatrack as a step sequenced filter bank, both for field recordings and my trumpet. Basically I would set different filter cutoff and resonance values to the sequencer and add some delay and it would turn any material into a groove. I used this technique to generate a lot of the drifting glassy rhythms you can hear throughout. Here’s a short clip of me experimenting with processing my trumpet.

In part two I’ll take a look at Hol Chan and some of my Belizean snorkelling adventures.

One thought on “The Making of Belizean Heat: Part 1 – Ella’s Garden”